Most guys who step into a gym have one motivation in common: We want big pecs. But as much time as we all spend benching, you’d think guys with enormous chests would be a dime a dozen.

Clearly there’s a disconnect between wanting something and achieving it — a gulf that’s as wide as the Grand Canyon. Training hard does not guarantee results.

We’ve identified eight critical steps to chest training that’ll help you progress by leaps and bounds faster than the other guys who may be working just as hard but not as smart. By your next chest workout you’ll know all the key considerations to creating a pec routine that’s guaranteed to build muscle, or just follow the one we’ve built here. Either way, we make your efforts to stretch your tees a whole lot simpler.

Want to maximize your chances of getting a great chest workout? These four tips can give you a boost:

#2 START WITH A PRESSING MOVEMENT

There are two types of exercises you can do to train chest: presses and flyes. Pressing movements are multijoint (compound) in nature because more than a single set of joints is required to perform the work (shoulders and elbows). That also means other muscle groups are recruited into the movement, notably the triceps and delts. Bench presses done on a flat, incline or decline bench are good examples. Flyes are single-joint movements that lock the elbows in a slightly bent position for the duration of the set. Unlike multijoint exercises, single-joint moves don’t benefit from the assistance of other bodyparts. “Target Practice” (pg. 84) lists specific- exercises under each category.

“Using a barbell doesn’t require nearly the amount of stabilizer muscle help you need with dumbbells, and this can better allow you to press serious weight.”

Multijoint exercises are best at build-ing size because you can use more weight to blast the muscle fibers involved. For that reason, incorporate these kinds of moves early in your workout when you’re the most fresh. After you hit your pecs with compound lifts, you can then move on to isolation exercises that work around a single joint.

This is why many bodybuilders start their chest workouts with the bench press. Using a barbell doesn’t require nearly the amount of stabilizer muscle help you need with dumbbells, and this can allow you to press serious weight. At the same time, slightly varying your grip from wider to narrower can help you target a different area of your chest because it changes the angle of your arms to your body. For example, a slightly wider grip can help you train the outer chest fibers to a greater extent.

#3 FOLLOW UP WITH A PRESS FROM A DIFFERENT ANGLE

To fully train your pecs, you need to do exercises from multiple angles. You’re most likely familiar with the notion that inclines best hit the upper pec fibers, declines are most effective at working the lower pecs and flat-bench presses best target the meaty middle-pec area. If you start your workout with a flat-bench exercise, following it with a press to emphasize the upper or lower pecs makes sense. Your best bet is to choose a bench angle that’s not only different from your first exercise but is also a personal weakness. If your upper pecs are lagging, prioritizing them could help bring them up.

Just as changing the bench angle to target a different area of your chest can help build fuller pecs, so too can incorporating different types of exercise equipment. Here, we’ve chosen dumbbells because they allow you to work each side of your chest individually, which will enhance your symmetry. They offer a slightly longer range of motion and allow you to better contract your pecs at the top, as long as the weights don’t rest against each other. They also require lots of involvement from stabilizer muscles while permitting a wider range of motion in all directions, which is especially beneficial if you have any kind of shoulder soreness.

#4 PRESS FROM THAT LAST PEC ANGLE

If you’ve already done a flat bench and incline press, the obvious choice for your next move is a multijoint exercise that targets the lower pecs. One often-overlooked possibility is the parallel-bar dip. Sure, dips are also done for the triceps, but to reduce the workload on the tri’s, lean forward and cross your feet behind you while allowing your elbows to flare out as you descend, because some people can do bodyweight dips for a high number of reps, adding a weight belt around your waist can effectively put you in a lower rep range for the desired muscle-building effect.

Alternately, you can use barbells or dumbbells to train the lower pecs, but if you’ve been training hard and your stabilizers are working overtime, it’s probably best to opt for a machine. Whether choosing a selectorized (pin-loaded) weight stack or the plate-loaded variety, machines don’t require much in the way of stabilizer-muscle involvement. While this doesn’t improve the synergistic effects of your various muscle groups working together, it does allow you to put maximum focus on the target muscle. You can also expect to be able to overload the chest with more weight than you can with dumbbells, since those stabilizers aren’t called into play significantly and won’t tire out before the bigger pecs do. And if you train alone, you don’t need a spotter when doing heavy machine work because safety isn’t an issue.

#5 ADD FLYES TO ISOLATE THE PECS

While heavy presses comprise the early part of your chest workout, after that it’s time to switch over to isolation moves. Because these single-joint exercises are typically done at higher rep ranges, the weight is necessarily lighter. To isolate the pecs, the elbows are locked in a slightly bent position throughout the rep, thus minimizing the contribution from the tri-ceps and delts. It also puts more pressure on the shoulder joints, so using good form is paramount. Doing a few sets of flyes at the end of your ches: workout is also a great way to top off your pectoral pump.

Besides isolating the pecs from various angles, flye-type moves hit the outer pecs very well because your arms are out and away from your body in the start position. In addition, because you can bring your hands close together — or in some cases even cross your hands in the peak- contracted position — flyes hit the inner pecs better than presses can.

Flyes can be done standing in the cable apparatus or using a bench at various angles with cables, with dumbbells on an in-cline bench, or on a pec-deck machine. Each variation is a little different, with the pec-deck machine being best for beginners as it locks the elbows in the slightly bent position.

We’ve said nothing about volume up till now, but it’s certainly a critical part of the muscle-building equation. There are several factors involved.

That does not mean, however, that you have to use the same relative intensity for nil your movements. We said earlier that for the best gains in size, you should reach failure in the 8-12-rep range, but neither do you always want to do sets of 10. Instead, go a bit heavier for lower reps early in your workout when your energy levels are high, and a bit lighter later on as fatigue starts to set in. So on the first exercise you might push very heavy weights for sets of just 6-8 reps, then proceed to sets of 8-10 reps by the second exercise, then do sets of 10-12 reps for the third move. With single-joint movements, sets of 10-12 reps work very well. These different relative intensities train the muscle in slightly different ways, with heavier weights being better for strength building and lighter weights for creating a muscle pump. This successful formula also helps prevent stagnation.

Don’t just stop arbitrarily at a predetermined rep count, though; make sure you reach failure at that range. If you can do another rep with good form, do it, but add weight on your next set if you could do more reps than your target range.

In terms of rest, 2-3 minutes on your heavy sets is ample, dropping to 1-2 minutes on single-joint movements.

Even the best, most productive chest workouts stop working after a while as the muscle adapts to it. (In general, that’s about two months.) Rather than trying to add volume via more exercises or sets, one of the best ways to bust through a plateau is to simply change up your routine.

One final factor in building a winning chest formula is to implement advanced training techniques. While a beginner will take his sets to failure at a particular rep target, advanced training techniques allow you to work past initial muscle failure, which encourages even greater muscle-fiber breakdown. As long as it’s not done too often — no more than about half of your working sets — you can boost your gains if you maintain good form and the associated pain is the ’‘good” kind. Here are a few worth considering on chest day:

Here’s a challenging chest workout that combines the eight steps as listed in the article. The focus is on size building.

Inside look at your chest anatomy 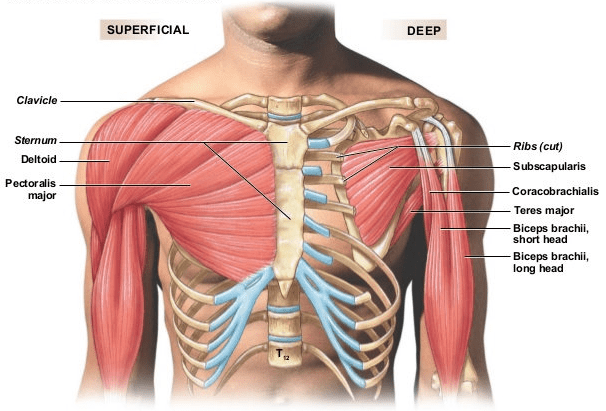 The chest is composed primarily of the pectoralis major, a fan-shaped muscle that originates from the clavicle (upper portion), ribs and sternum (lower portion), and converges to a common insertion on the humerus (upper arm).

For training purposes, the chest is tipically divided into the upper, middle and lower portions, as well as quadrants within those sections.

The smaller pectoralis minor lies beneath the pectoralis major, and the two muscles are trained together.

The muscle fibers of the chest run in all directions, which is why you must build your routine with a variety of exercises to reach them all.

You can’t simply do flat-bench work and expect your pecs to be fully developed from top to bottom.

To hit all those areas, you have to work the muscles from multiple angles to force those fibers to engage.