Almost (exactly) 40 years ago, two guys had an idea to bring bodybuilding to the masses. What eventually became the seminal bodybuilding movie actually started out as a book; a book that was almost never published. Not only did the book, Pumping Iron, almost never get published, the iconic movie of the same name, that is credited with starting Arnold’s acting career, also almost never happened. It’s hard to imagine our world without Pumping Iron, or, more incredulously, that the enormity of Arnold Schwarzenegger might not ever have been.

To view him now, having occupied a seat of so much power and fame, it seems unimaginable that history could have been devoid of not only Pumping Iron, but also Conan, the Terminator, Predator, all his other films, A marriage to a Kennedy, the Arnold Classic, his governor’s seat, and now the reemergence of his acting career with the Expendables 2, not to mention what else he has in store for us in life after Maria.

That’s not to say that Arnold’s indomitable spirit may not have persevered and he become otherwise notable,but the path that Pumping Iron fostered for Arnold is undeniable. As ingrained as “Pumping Iron” is in the contemporary bodybuilding lexicon, no one knows how perilously close Arnold came to having never been discovered.At least not by the inevitable path he took.

In 1972, two writers, Charles Gaines and George Butler were working together on a book about bodybuilding called Pumping Iron. In September of that year, in order to publicize the book, Butler and Gains hired a few bodybuilders,including a relatively unknown guy named Arnold Schwarzenegger, to give an exhibition at the Brooklyn Academy of Music.  Butler knew of Arnold because Joe Weider had been promoting him in his magazines.  Eventually he got the appropriate assignment for The Village Voice and photographed Arnold in NY. Those pictures in The Village Voice were the first time Arnold’s pictures had ever been seen outside of bodybuilding and marked the first encounter that would change both men’s lives forever.

Roughly 300 people attended the exhibition at the Brooklyn Academy of Music. According to Butler, It was heralded in the press as something roughly equivalent to midget wrestling and dwarf tossing. Sports Illustrated covered the event and stated in its coverage, “this is the first and last time we will ever cover Arnold Schwarzenegger.”The original publisher for Pumping Iron was Doubleday. Butler had already published a book with them on the Vietnam war and Gains had just published a book called Stay Hungry (which eventually became a movie and marked the first film in which we heard Arnold’s real voice– Arnold’s first film, Hercules in New York was dubbed and the hit man character Arnold played in The Long Goodbye was deaf and mute).

When they turned in Pumping Iron the agent at Doubleday told them no one will ever buy their book. He told them they were a disgrace and had squandered their advance. This seems odd considering the success Weider was enjoying back then, however, Weider never marketed outside the industry. He only concentrated on bodybuilding. Butler and Gains couldn’t have imagined how difficult it was to get anyone on the outside to look at their bookand take bodybuilding as anything other than a circus side show.

Eventually they went to Simon and Schuster, a much bigger publisher that could afford to take a gamble on such a book. Through their superior sales and marketing Pumping Iron was on the Best Seller list before it hit the stores and in its fifth printing. It was then that Butler and Gains knew America was ready for bodybuilding. Two years later in Forest Park, Massachusetts,Butler, who was mainly a writer and still photographer with no experience at all in film, believed that this guy named Arnold Schwarzenegger, whom he had met for the first time two years earlier, should be on the big screen. So, he borrowed $30,000.00 (a huge sum in those days) and made a test film with Arnold at an event held in Forest Park.According to George, Arnold was very good in the film. He really thought he had something in Arnold. So, he called up some friends he had on Wall Street and got 100 people – potential investors – to watch film. They watched in dead silence. After the screening people looked embarrassed. One of the guys in the room told Butler, ‘If you ever make a film about Arnold we will laugh you out of NY.” Another gentleman said, ‘I’ve never felt so sorry for anyone in my life as I felt for you here today.”

Not to be deterred, Butler still had options. With Pumping Iron still on the Best Seller list, he went to Hollywood. But everyone he knew laughed and turned him down at the prospect of making a movie about bodybuilding staring Arnold. Ned Tanen – head of production at Universal said, ‘this is the most ridiculous idea for a movie I’ve ever heard.” That conversation always stuckout in Butler’s mind because 10 years later when Tanen was head of Universal, he was making a film called Conan the Barbarian, staring guess who?

When trying to get a movie company to pick up the idea of the Pumping Iron movie, George Butler was met with one brick wall after another. In January of 1976 he didn’t have enough money to finish the movie. He did a screening for this guy named John Mac from a little company called Morgan Stanley. Afterward, Mac said, “I kind of like this guy Arnold but how do I know anyone will pay to see him?” This was encouraging enough for Butler to go to the Whitney Museum in New York and talked them into putting on a live bodybuilding exhibition. Butler sold them on the idea that bodybuilding is art and they went with it, organizing an exhibit called “Living Sculptures.”

The opening night was a mad house.

Butler was upstairs getting ready for the exhibition to open and someone came up to him and said, “you had better look out the window.” When he did, Butler saw 5000 people waiting in line to get in! They were all bodybuilders! Admission was $10.00, and soon after the doors opened the cash registers overflowed. People were throwing their money on the floor and it was piling up. When John Mac walked in and saw all the money on the floor he changed his mind about Arnold. This was February, 1976 and yet there was still opposition. After the event at the Whitney Museum, where famed artist Andy Warhol showed up and was photographed with Arnold, Butler was sharing a cab with actress Candice  Bergen who had been a celebrity commentator for the event. She said, “Arnold’s career is over. This thing with Andy Warhol was his 15 minutes. It’s over.”

As the apocryphal story goes, Butler scoffed and told her Arnold is going to be governor of California one day. he laughed and said back to him, “Yeah right, and Ronald Reagan will be president.”

By hook, crook, and any other means, George Butler was finally able to secure the funding he needed to finish his film. When the film opened it played number two to Rocky with lines around the block. Butler talked Jacqueline Kennedy into coming to the premier party at Elaine’s in New York where she met Arnold. Andy Warhol came to the opening of film… every celebrity came to the opening.

Afterward, Arnold was on the Today Show, and his pictures were everywhere. It was an instant success.  Did Jackie Kennedy’s attendance at the premier party  have anything to do with Arnold meeting Maria Shriver? It sure did… In July, 1977, after the film had been released, Butler got a frantic call from a woman named Helen Bransford. She worked for a publicist named Bobby Zarren. They were frantically looking for Arnold to attend a celebrity event and wanted to know if he knew where Arnold was.

Butler told them that Arnold was on Mohegan island off the coast of Main. But there were no telephones on the island. So, Butler got a guy named Jimmy Belano to get on a lobster boat to pick Arnold up. A car met Arnold at the dock and took him to the airport and flew him immediately to the Robert F. Kennedy celebrity tennis tournament. That’s where he met Maria. The next morning, Sunday, Butler got a call from Arnold and his aid, “George, guess where I am? I’m at Hyannis Port!” Quick work Arnold.

Arnold bought the rights to Pumping Iron some years ago. It has played many times since all over the world. In fact, he ran film 50 times on Cinemax prior to the recall election. Why? Because awareness is a very important thing in politics. Anyone who saw it would know how serious he was. Anyone would come away from the film saying I know this guy… I trust him. I guess that’s true, except for maybe this line from Arnold in the film where he was talking about his psychological warfare tactic against Lou Ferrigno: “And… that night, he will never forget. I will mix him up. He will come to South Africa so ready – so strong – but by the time the night is over – the next morning – he will be ready to lose. I mean… I will just talk him into that.” 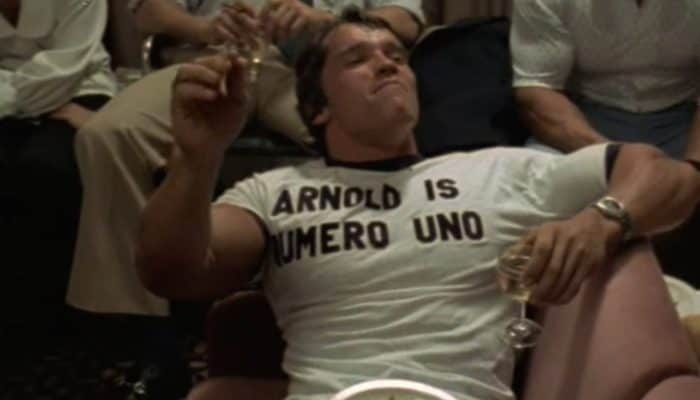 I never thought that film, nor the contest it documented were fair to big Lou Ferrigno. But, as they say in the IFBB, “it is what it is.” At least Louie made it big in his own right and is still living a very successful life. And deservedly so. But he will always be overshadowed by the man who became, ironically, the governor of the state where Louie lives, in spite of the premonition denounced by the twice wrong Candice Bergen. Because as it says on Arnold’s shirt while he’s inhaling a big lung full of pot smoke at Louie’s birthday celebration, “Arnold is numero uno.” There is no doubt that Pumping Iron made sure of that.